Lenovo kick started the tech 2013, showing his phablet 5.5 inches, Lenovo K900. Now the company has announced five new Dual SIM smartphones.
Both S series smartphones seem to be top models and aims according to the company of young, urban professionals. 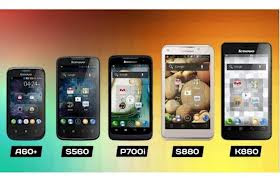 The other device S-series is the S790, which comes with 4.5-inch IPS (960×540) display. It comes with an 8-megapixel camera on the back and front camera 1 megapixel. It is 9.9 mm thick and is as Lenovo called “loop” design. Should be available in three colors and runs on Android 4.0 (Ice Cream Sandwich) is available. It will run on dual-core CPU and a 2000 mAh battery MTK.

Lenovo P770 Phone Idea is best for frequent travelers, as it can with 3500mAh battery and according to the company comes up to 30 hours of talk time between charges. It runs on Android Jelly Bean. The other notable feature of this smartphone is the USB on-the-go feature.

“For smartphone users, one size does not fit all,” said Liu Jun, MIDH president and vice-president of Lenovo Group: “We have learned from our customers, and we know that we have many different reasons choose only the Lenovo smartphones developed. Our new portfolio devices features to surprise you and a wide range of customers all over the world. one phone for every user

Lenovo has not revealed the price of one of these smartphones, but should be launched in China soon.

The smartphone maker has also introduced Chinese Idea Phone K5 Lenovo at CES in early 2013. It is a single SIM smartphone that comes with a high resolution of 5 cm. It sports a dual-core processor graphics and a rear camera megapixel 13th