Samsung plans to launch smartphones with flexible and unbreakable screens

Samsung has been rumored to be preparing flexible, high-resolution displays for its smartphones, and this week at CES South Korean technology giant rumors, confirmed by several prototypes.

In his speech, the company announced Youm, a new line of flexible OLED screens. OLED technology allows screens to create businesses thinner and lighter than other more vital technologies of high definition. 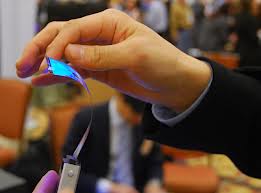 “It will not even break if dropped, and you can actually turn the screen,” says Berkeley, then grabbed the edge of a prototype display and began to lean forward and not back on the screen or the image quality.

Berkeley has a prototype phone that uses a screen Youm. The part of the curve of the display device at an edge thereof.

“The content can now flow along the sides of the device,” says Berkeley.


Then the phone is covered with a case that came out of the curved part of the visible screen, and showed how he still read a message without having to use the entire screen.

“This type of screen is to provide our partners to create a whole new ecosystem of devices,” he said. “The screen devices folded, fold and roll.”

Samsung introduced a video where two guys have devices with screens Youm. It is a tablet, which is then folded and a second screen on the outer side, so that they can be used as a telephone. On the other device, the screen slides out of the box after pressing a button.

“Make design to any product with it,” says Berkeley.

But the company does not say, if and when their smartphones are produced with these flexible displays.

You can watch the program on YouTube. Youm The presentation will begin approximately 40 minutes.