Fujitsu Lifebook GH77/T is half tablet PC and half Desktop computer. Last Fujitsu PC can carry brand name signature for laptops and tablet products, but the Lifebook GH77/T is more an interesting hybrid between a tablet pc and desktop PC. 15.6 inch tablet really, contains a battery and wireless transmitter – all major hardware resides in the included dock. 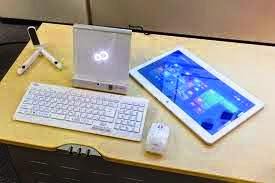 Being free of the limitations of the battery and the lack of space hardware GH77/T therefore can hang with actual desktop PCs, while the wireless touch screen allows it to be used as a tablet, provided you stay within a radius of 30 meters around the dock.

A quad-core 3.3GHz Intel Core i7-4712HQ resides within the dock, plus 8 GB of RAM and a 2 TB hard drive. WiFi-n, WiDi, Bluetooth 4.0 and NFC support, while four USB 3.0 ports, HDMI, Gigabit LAN, SD card slot, and a Blu-ray writer complete the rest of the main features. The device works with Windows 8.1 64-bit, and there’s a webcam on the front right.

The Removable 15.6 touch screen offers a resolution of 1920×1080 pixels, and includes a headphone jack with volume control, battery but apparently hard – wait for it -. Only four hours That’s pretty low, particularly because the parties high Actual energy consumption are in the dock. It is relatively light, at least 2 pounds.

Like many consumer offerings from Fujitsu, the Lifebook GH77/T is sold only in Japan, but you may be able to import, given the courage … and money. The equivalent of $1.668 USD is what Kakaku they currently have in their favor, which, at least, is lower than the suggested price $2.011 originally reported by Akihabara News.