Android M: How to install the App Drawer on your Android Smartphone Running on android Lollipop step by step guide. After the great success of Android Lollipop, Google has recently launched the next edition of the adored Android operating system. Announced at the Google I/O 2015, the latest version is available only in preview version and can be downloaded on Google Nexus series like Google Nexus 5 Nexus 6, and Nexus 9 and nexus player. 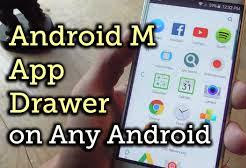 If you do not own any of the aforementioned devices, do not feel sad, like Android Pit write a function that can give you a taste of the much-discussed role of initiator in you Lollipop M Android smartphone. Before diving into the step by step guide, we will tell the Android launcher M offers more features at a more intuitive interface.

Once you make sure the application Google Launcher is there on your smartphone, download the Google App .apk file from there.

Android blocks the installation of applications from external sources by default. If you have not already selected, go to Settings >> Security and check the installation from unknown sources check box.