Microsoft Lumia 950 and Lumia 950XL are the smartphones under the flagship of Lumia portfolio are the first smartphones having Windows OS. With a familiar and consistent experience that extends through its Windows devices, including Windows Hello beta for Lumia and Continuum for Lumia phones. 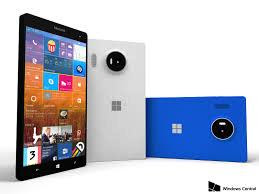 The 5.2-inch Lumia 950 uses a Qualcomm Snapdragon hexa-core processor 808 and comes with 3GB RAM and 32GB of internal memory. The good news is under the back cover a microSD card slot, which can increase the memory capacity to a massive 200GB, plus there is a removable 3000mAh battery which can be charged wirelessly.

For Lumia 950XL, Microsoft selected Snapdragon processor 810 OCTA-core and equipped with the same amount of RAM and internal memory.

The capacity of the battery increases 3340 mAh removable. The screen size is also increased to 5.7 inch, and although it has the same 1440p resolution, with Gorilla Glass 4 instead of gorilla glass 3 covered in the Lumia 950.