Samsung introduced the Galaxy Tab 3 kids , a tablet for children

The tablet market is not exactly booming for children, but it’s definitely there. Companies like Nabi tablets are some pretty impressive for children, and it seems that Samsung joined in.
It is no secret that children are using technology more than ever. We saw an opportunity to create a device for children that provides an intuitive, and fun for kids, complete user experience of multimedia content, interactive educational and parents will love it. 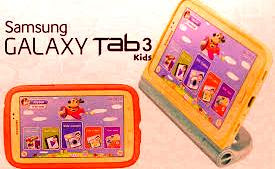 This new Tablet For Kids called Galaxy Tab 3 kids, and as you might have guessed, is on the Galaxy Tab 3, namely 7- inch model. It has clocked a rubber buffer to protect a resolution of 1024 x 600 , a dual -core processor at 1.2GHz , 1GB of RAM , Android 4.1, 3MP rear camera with 1.3MP front camera, 8GB memory with microSD slot and 4000 mAh. Data not nothing to a child, but it is possible that Android passionate mother!

Instead of running stock Android or TouchWiz Samsung has developed a new interface for children. It is cut with an app store for children and are a function of the time – management, to allow only a certain number of uses per day. It will also come with a lot of educational content, games and even books pre-installed.

Samsung also offers a special case than in children with a stand designed for small hands . This case comes with a pen C, to draw a fine ballpoint pen on the tablet.

This new tablets coming soon. This tablet will be launched in early September in his native South Korea, and then proceed to launch in other countries, especially in Europe and the United States. No price is given, but it should be around $ 200, like its more mature brother. Maybe lower the price for children. Who knows?

But of course, raises the question: Is it necessary for a child to have a tablet? A few years ago I would have said nothing. But times have changed. A tablet may be an excellent educational tool and software optimized properly can really help a child to learn. Could a tablet really the new Barbie? And such tablet For Kids are good thing with the launch samsung galaxy tab 3 kids?